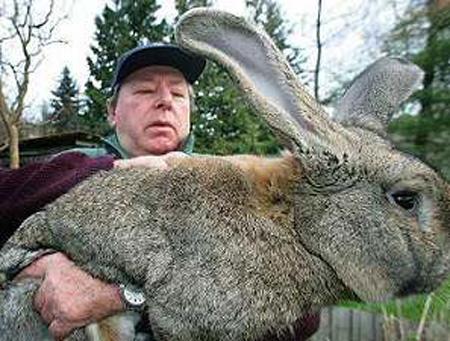 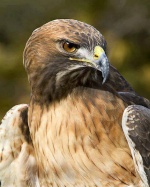 # هذه البيانات من موقع الموسوعة الحرة النسخة الانجليزية
Herman is a German Giant Rabbit. The German Giant is a new breed of rabbit that was bred in order to produce a rabbit that could provide more meat. Herman weighs an astounding 7.7 kilograms or 22 pounds and is just under a meter long with ears alone measuring at 21 centimeters which is the total height of an average domestic rabbit. Hans Wagner is the owner of this supersized rabbit and says that Herman goes through just over 2 kg of food a day. The giant bunny lives in Berlin with his owner in a special oak hutch and also takes a vitamin supplement to keep him healthy. Herman munches through a bale of hay a week and his favorite snack is lettuce.

However, Herman isn't the largest rabbit in Berlin, he was beaten to the crown of the 'Berlins Biggest Bunny' contest by Rudi, who weighs a whole kilogram more than Herman

Hello! My name is Herman and I am a Big German Giant Rabbit.

You can see a picture of me here with my surrogate Dad, Hans. He loves me and is really proud that I am his Bunny. We live happily on Hans's farm with lots of other animals.

I decided to get my own site because lots of papers have printed my picture and I think its a good idea to take advantage of the publicity to make more friends. However, I am aware that fame is a fickle mistress. I understand what Pete Doherty goes through... not that I'm a habitual drug user and/or likely to get arrested every few days (I like grass, but not that kind of grass - aaaahahahhahah etc)

I am not ashamed of my weight issue because I think it adds a certain je ne sais quoi to my personality. I am kind and generous, I make friends easily and like being cuddled by everyone. My favourite thing is to have my feet tickled whilst munching on a big carrot - or maybe a parsnip
Although once, some nasty boys were pointing and laughing at me and saying that I was fat and that they'd make a Rabbit pie out of me that would last about 6 months. So I hopped over to them and kicked them in the bollocks with my gigantic feet. Ha Ha Ha. Never saw them again.

Other than that, I am usually calm and sociable. I like playing Bridge on Thursdays and sometimes enter the Euro Lottery. If I win my dream is to buy a huge meadow for Hans and me to live in, full of carrots and parsnips and big girl bunnies.

See if you can help out, support, donate, sponsor or even offer a lovely home to any of my chums who aren't as lucky as me.... here: [ندعوك للتسجيل في المنتدى أو التعريف بنفسك لمعاينة هذا الرابط]
But please note all you large rabbit lovers out there... I don't actually know where you can buy a giant bunny from so if you're serious about finding your very own Herman you might be better off visiting the above website who will give you all the tips on how to raise a rabbit like me. We take a lot of work, care, love, attention and time and we're not for the fainthearted!! A rabbit is for life kids, not just for Easter!! ALSO!! All you overly concerned german giant bunny rabbit lovers out there - please don't worry, I, Herman will NOT be sent to North Korea to feed a family of 35. And please don't be confused because its not Hans who is sending us big'uns to N.Korea, its another man, a nasty man. But we shall rise up and mutiny! VIVE LA RABBIT REVOLUTION! 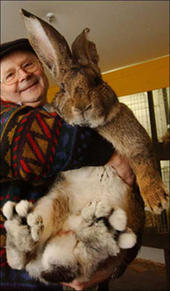 Enlarge Image
A man has been showing off his gigantic rabbit named Herman.

The mighty bunny weighs a massive 7.7kg, and his ears are a lengthy 21cm - almost as long as most pet rabbits are tall. And he is almost 1m tall.

The German Giant is even big for his breed, which usually tip the scales at around 6kg.

Herman lives in a specially built solid oak hutch and chomps his way through just over 2kg of food a day. His owner says his favourite snack is lettuce.

The giant bunny, who lives in Berlin with owner Hans Wagner, also takes a vitamin supplement to keep him healthy, and munches through a bale of hay a week.

Herman could be the world's biggest rabbit, but Guinness World Records have stopped accepting entries because of fears people were over-feeding their pets.

German Giants do not exist in the wild, and have been developed by breeders.

They can live for as long as 12 years. 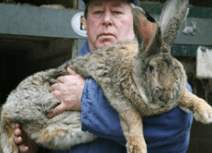 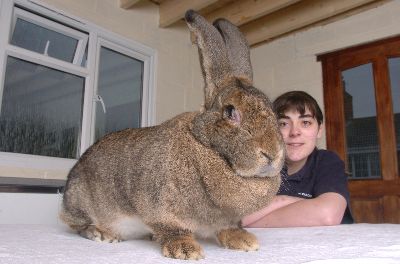